The NPFL 2020/21 season has been eventful so far following series of upsets in some matchups.Gradually, the boys are getting separated from the men, the league is taking shape.

Meanwhile, kudos must be given to the partners of the LMC, Redstrike TV, as well as the crew of the NPFL Radio for the coverage of the matches on Radio and TV on a weekly basis, it’s been commendable.

With eight weeks gone in the season already, a total of eighty matches has been played with 150 goals scored, 51 home wins has been recorded, 11 away wins and all the clubs have shared the spoils 18 times.

Here are the NPFL matchday 9 previews;

So, the matchday nine beckons this weekend and we’re set for exciting fixtures that’s to come up beginning from Saturday.

According to the LMC, four of the ten matches will be live on the NPFL TV App.

League leaders, Enyimba will be at home to at 4pm the defending champions, Plateau United on Saturday.

Monday would witness Ifeanyi Uba against Kano Pillars at 2pm and Rivers United would play host to the Solid Miners, Nassarawa United at 4pm.

MFM looks like the better side in this fixture albeit they lost their last match to Wikki Tourist.

They haven’t lost at home since February 2020.

So, seeing how the season has panned out for Heartland, MFM is expected to give a commanding performance, at least to extend the unbeaten run over Heartland and probably keep the unbeaten streak at home.

For Coach Fidelis Ilechukwu, he would return to the Agege Township Stadium on Sunday to face his old employers.

Since his exit from MFM, Ilechukwu hasn’t found joy against the Olukoya boys on two consecutive occasions.

The chance for the Naze Millionaires in this tie looks pretty slim given the dark clouds hovering over the Owerri giants – Bad time to travel to Lagos.

Rangers currently sit fifth on the log, all thanks to flawless win they got against Dakkada on Wednesday.

But they could move all the way to the second position if they beat Warri Wolves and Rivers United, Kwara United and Kano Pillars drop points in their matches.

Also, statistics shows that Salisu Yussuf’s side are yet to lose a match at home this season.

And as a result of the news flying around in the camp of Warri Wolves over the non-payment of salaries by the Delta State government, Warri Wolves looks more of a disturbed side going into this encounter.

Meanwhile, it’s expedient for Evans Ogenyi’s Wolves to grab the maximum points in this tie as their next two matches will be against Enyimba and Abia Warriors respectively – Herculean task awaits Warri Wolves.

One of the fixtures that would be on TV, it goes live at 4pm on Sunday. Going in to this encounter, the Warriors are obviously the team with the right psychology, mood and dynamism.

While Dakkada fluffed their chance to move higher on the log on Wednesday against Enugu Rangers, Imama Amapakabor’s Warriors put up a eye-catching performance against Sunshine Stars, beating the Akure based side by four goals. 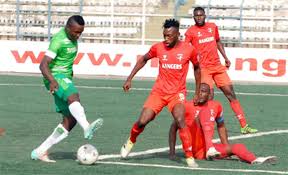 At the moment, Abia Warriors are the first and only side to win a match this season by four goals, the win was also Imama’s first over Gbenga Ogunbote in four encounters.

This is one match that form isn’t a determinant, it’s a fixture that could go either ways based on past matches.

However, Wikki Tourist looks as though the better side. Coach Kabiru Dogo would certainly rue his team’s inability to score goals, having played two barren draws in his last three fixtures.

Wikki Tourist are coming from the back of the 2-nil win against MFM in Bauchi.

Can they go as far as recording two consecutive wins for the first time since 2019? Time’s of the essence.

We have a tricky game upon us in Akure on Sunday, it’s just a pity that it would not be on TV.

A clash of two attacking sides that’s got a brazen form this season.

Sunshine Stars would look forward to bouncing back from the 4-1 shocking defeat in the hands of Abia Warriors.While a win for Kwara United would fly them to the summit of the table.The better scoring side will surely take the day.

Ifeanyi Ubah has been unable to beat Pillars in the last three matches, and they haven’t started this season as one would expect them to start.

They’ve not been scoring much of goals and they haven’t recorded more than two wins this term.

After 8 matches, the Nnewi side are languishing on the 17 position with eight points from eight matches.

It could get worst for them this weekend against Sai Masu Gida who have scored in seven of the eight matches played this season, it definitely would be the undoing of Ifeanyi Ubah.

Another match that would be live on TV this weekend.

It’s no longer news that Enyimba would be without the services of their ace midfielder in Anthony Omaka due to suspension in this tie.

Enyimba looks to have found a new rhythm having won three matches on the spin.

It was their first win against Nassarawa United since March 2005. While Maikaba’s side are still struggling to be consistent this season.

This should be another home win for Peoples Elephants that would extend their lead at the top to six points.

No winner have emerged from this tie in the last two encounters, hence the uncertainty about who would emerge victorious.

Unless the unexpected happens, this should be ending in a draw as well.

These two sides lost their last matches in the hands of Katsina United and Akwa United respectively.

However, Rivers United have won this fixture thrice in the last five meetings.

This would definitely be a cracker and for Stanley Eguma’s Rivers side because if their going to usurp Eyinmba at the top of the log or get to knock them of the CAF Confederations Cup, this would be their open sesame.

Lastly this weekend, Jigawa Golden Stars face off with the only team that’s yet to win a match this season, Adamawa United.

It could only get worse for United in this tie due to the fact that JGS craves for resurrection from their last match against Kano Pillars.

And in Adamawa United they have their resurrection already.

Football’s Top 8 Youngsters Living Up To Their Hype